5 Reasons to Consider Sending Your Child to a Private School 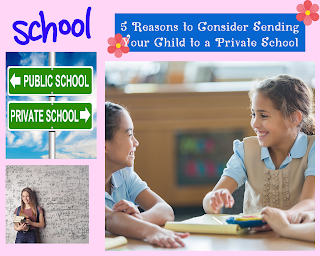 Getting a good education is why parents send their children to school, and so it's important to make a good call when choosing a school. When it comes to making a decision between private, public school, or homeschooling, there's always going to be a debate. Read on to see five reasons why some parents consider private school over public school, and you will understand why more parents are doing the same.

Did you know that students in private schools are almost 50% more likely to take IB or AP courses in math and science than students in public schools? Because of selectivity, your child will be expected to perform to the best of their ability. They'll aim higher than they might in a public school setting. Because of this, they'll likely take advanced classes in a private school.

Private schools are generally accountable to a school governing board and to the student's parents. This is unlike public schools, which are accountable to the state they're in for educational outcomes. This means that in private schools, parents need to stay informed on the goings-on and speak up if they feel they need something to be addressed. Because they're not shackled by endless bureaucracy, educators can use teaching styles and a curriculum they believe to be the best, which often has proven efficacy.

Needless to say, private schools are independent. They don't have to follow along with decisions made at a district level. This is because it's hard to get a one-size-fits-all fix as far as educating children goes. The fact that times are changing constantly and giving rise to new needs and settings also means that it's important to quickly adjust to changes in a way that will benefit the students. This is a lot easier for private schools to do than it is for public schools. With one out of every four schools being a private school, it's possible to find one that you feel fits your ideals and will meet your expectations.

4. They're Focused on Student Welfare

Another benefit of private schools is that they can be more focused on student welfare than public schools are. This may be due to the fact that private schools have fewer students than public ones in general. Because of that, it's possible for educators to allocate more time and attention to individual students. As a result, any student with special needs will have them met more easily, and they will therefore respond positively to the help they get.

5. They Can Produce Better Results

If you're thinking of taking your child to a private school, do your research and see if it's the best fit for your family.

Devin is a writer and an avid reader. When she isn't lost in a book or writing, she's busy in the kitchen trying to perfect her slow cooker recipes. You can find her poetry published in The Adirondack Review and Cartridge Lit.