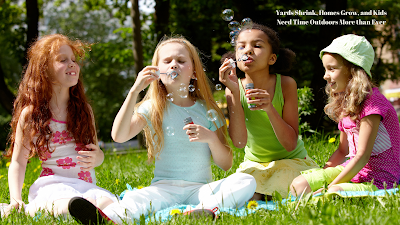 A few years ago, several different news sources began reporting a disturbing trend in the United States: the average size of a person’s home was growing, but the average size of yards was shrinking. In 2015, the average lot size was down 13% from 1978, reduced to a mere .19 acres, according to The Atlantic.

This is not to say that old homes' lawns were shrinking. The study focused on new homes and found that Americans preferred buying houses with a greater house-to-lawn ratio than ever before. According to Martekwatch, this means that lot usage has reached an all-time peak. Lot usage, or how much land is devoted to a house rather than green space, is now a whopping 25%.

A survey conducted by Harris Poll for the National Association of Landscape Professionals revealed that three out of four Americans (75%) still felt that spending time outside in their yards was important. So why are so many choosing to buy bigger houses with less lawn space?

According to The Atlantic, cutting down on acreage makes homes more affordable in a tight market. Families can still get the number of bedrooms and bathrooms they need if they sacrifice yard space.

Another suggestion is that many suburban families have become more environmentally conscious. Rather than maintaining a fake, lurid-green lawn with wasted water, some homeowners opt for rock gardens and make the park their yard instead.


Regardless of whether you prefer a large lawn or live large in the city, getting outside is still essential for human health and childhood development. This month, Business Insider reported that children spend half as much time outside today as their parents did growing up. Business Insider also noted that more and more, “nature deficit disorder” is being recognized in kids who lack a connection to the outdoors and are vitamin-D deficient.

Luckily, there are ways to get kids outside more, even though many have packed extracurricular activities and live in homes with small or non-existent yards. Here are five suggestions to get you and children back in touch with nature this fall:
Times are changing, yards are shrinking, and some days, it may seem harder than ever to get outside. There are tons of ways to help kids spend less time on screens, even if you have limited outdoor space near your home. Take time to reconnect with nature, and your whole family might be happier for it.
Devin is a writer and an avid reader. When she isn't lost in a book or writing, she's busy in the kitchen trying to perfect her slow cooker recipes. You can find her poetry published in The Adirondack Review and Cartridge Lit.
at 8:14 PM

Email ThisBlogThis!Share to TwitterShare to FacebookShare to Pinterest
Labels: kids and outdoor time