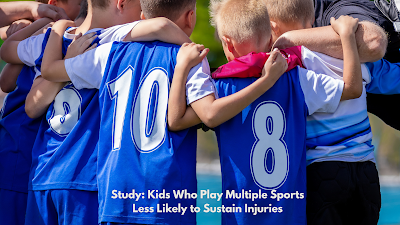 Although playing a sport is often considered to be a rite of passage as well as an American tradition, parents often experience an interesting juxtaposition of swelling pride and impending dread as their child walks up to bat, heads out on the field, or runs onto the court. That's because sports injuries are extremely common -- and are often extremely traumatic. But after careful analysis, experts say there may be a simple (yet seemingly counterproductive) way to prevent them: by playing more sports.


That advice might seem strange, given the prevalence of sports injuries among young Americans. According to the U.S. Centers For Disease Control and Prevention, more than 3.5 million children under the age of 14 receive medical treatment for sports injuries on an annual basis. And while only 3% of all patients who go to urgent care need to be diverted to an emergency department, children between the ages of five and 14 account for almost 40% of all sports-related injuries that are treated in U.S. hospitals. The statistics aren't much better among older teens; high school athletes sustain an estimated 2 million injuries -- and subsequently make 500,000 doctor visits and 30,000 stays in the hospital -- every year.


The CDC also reports that more than half of all sports injuries in children are preventable, with overuse injuries accounting for nearly that same percentage. While many parents might assume this means their child should steer clear of sports involvement, a recent study shows that the exact opposite may be true.

In an analysis of first-round NBA draft picks, Dr. Nirav Pandya and his team found that players who participated in multiple sports during their high school years were less likely to be injured in the long term compared with players who specialized in only one sport. Of the 237 athletes studied, only 15% were deemed "multi-sport" athletes, while the other 85% played a single sport in high school. The multi-sport athletes played in a higher percentage of games and were much less likely to sustain injuries throughout their career.


While the team admits that more research is needed to draw definitive conclusions, Dr. Pandya thinks it's significant that playing different sports can prevent overuse and strain of muscles and ligaments. Not only will young athletes be more skilled if they participate in different sports, he says, but they'll also be less likely to be injured during practices or gameplay.


If you want to help your child avoid these potentially devastating sports injuries, Pandya recommends that children wait until they reach at least 14 years of age before shifting their focus to one sport only. That's because bodies become more agile and experience increased growth by that time, both of which can reduce injury risk. Participating in different categories of sports and physical activities can help kids stay active throughout the year, ignite different interests, and prevent bodily harm.


Keep in mind that those sports don't have to be football or baseball. Martial arts, for example, can provide an amazing workout (participating for an hour can burn up to 500 calories!) while teaching kids about the basics of self-defense and problem-solving. Swimming can also be an excellent yet gentle way to fit in physical activity. Since these sports can both be performed in the wintertime, they're a great option for those who live in colder climates or aren't necessarily drawn to the outdoors.


Of course, taking part in multiple sports won't guarantee that your child won't get injured. Make sure they follow proper safety procedures, use equipment kept in good working condition, and play under the guidance of reliable coaches. Remind your child never to push through the pain, as this can make injuries worse or more likely, and to always stretch and hydrate properly.
Devin is a writer and an avid reader. When she isn't lost in a book or writing, she's busy in the kitchen trying to perfect her slow cooker recipes. You can find her poetry published in The Adirondack Review and Cartridge Lit.
at 12:10 PM