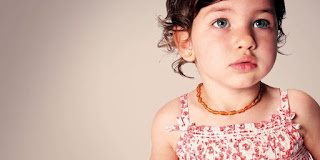 
I knew that when I became a mother, I wanted to take the most natural route as possible. I didn't want to fix something that wasn't broken, so to speak, and did as much research as I could to ensure that was the case. When my baby was born, I did an all natural delivery with no drugs so that my newborn wouldn't be dazed and confused.


They would be awake, they would be alert, and we could bond during those precious few hours. I knew that I wanted the rest of his childhood to be the same way. I had done research while I was pregnant on no vaccinations and knew that I would do homeopathic remedies for the common colds. I even registered for Baltic amber necklaces.
Baltic amber is not a new cure but has recently caught traction in modern parenting due to its effectiveness in not only teething tots but in adults suffering from chronic joint and muscle pain, women who endure awful menstrual cramps, people who have compromised immunity and want to naturally strengthen it, and even people who are suffering from mild mood disorders.
This is due to the succinic acid that's found in the sap of the conifer trees found in the region near the Baltic Sea. Succinic acid has recently been dubbed as Nature's Ibuprofen by scientists who study amber and its medicinal benefits.
After reading everything that I did about Baltic amber and how it not only works as a cure for teething babies but adults suffering from pain caused by inflammation, I decided to purchase an amber baby teething necklace for each family member. When buying amber, you'll notice that you can either purchase a raw or polished stone. If you're buying a necklace for your child, I would suggest buying a polished bead of a lighter color.

This is because the raw surface of the amber bead can be porous and cause irritation on your baby's skin. Light colors of amber contain more succinic acid, which is perfect when buying a polished bead. This means your body won't have to work so hard to heat the bead and pull its medicinal oils from its surface. Once absorbed by your body, you'll start feeling it's healing effects almost immediately. 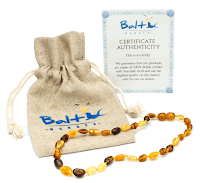 We received our necklaces not too long after purchasing them and put them on as soon as the package was opened. Within three days of wearing them, I had already started to notice that my son was not only acting better during the day, but he was actually getting some quality sleep during the night.

One morning I looked into his mouth and noticed that his gum inflammation had decreased significantly, which explains the drastic change in behavior. During the next few days is where Baltic amber really shined! My husband has been suffering from shoulder pain since he was a teenager due to a four-wheeler accident. He has been in chronic pain since then and hasn't found anything that relieves it.

After a week of wearing Baltic Amber, we had noticed a 180-degree change in his range of motion and overall comfort during the day. After a month of wearing it, my husband wrote a review stating that Baltic amber did what surgery couldn't.

If you are interested in seeing what Baltic amber can do for you or someone you love, purchase a necklace today and feel the magic of Baltic amber for yourself.

Jenn Sanders currently works as a marketing assistant at Baltic Wonder, a company that is dedicated to the health and well-being of infants. Outside of work, she enjoys spending time with her family and outdoor adventures.
at 12:27 PM