Why Thrifting And Resale Is On The Rise 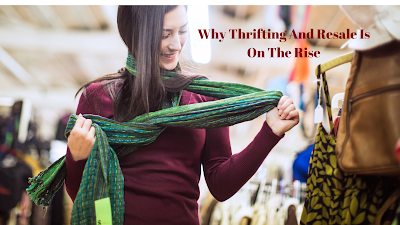 When it comes to shopping, Americans tend to spend a surprisingly large amount on clothing and fashion. The Bureau of Labor Statistics has reported that we spend $1,800 a year on clothing. That might seem excessive until you account for families with children. Unfortunately, as the parents of growing kids can confirm, much of this is spent on clothing that will quickly become damaged or unusable within that same twelve-month period. On top of that, fast fashion has thrived on quickly producing inexpensive clothing with a shorter lifespan that keeps consumers coming back for more, and more, and more.


However, a surprising competitor is now giving fashion industry icons a run for their money, with some major brands like ASOS seeing profits dropping as much as 87%. Resale stores and secondhand clothing is becoming increasingly popular worldwide as people demand more environmentally- and economically-friendly ways to shop for clothes. If current trends continue, resale stores are likely to put the fast fashion industry in a precarious spot for years to come.

While it might be easy for many to suggest the general population simply cut back on consumption, sometimes it's not quite so simple. There are many reasons for consumption to still be necessary when it comes to clothing. Most clothing, no matter how durable, isn't designed to last forever. Even fishing waders only have a lifespan of up to 3 years with moderate wear and care. When these items fall apart, they'll need to be replaced, which necessitates buying new clothing. It might be possible to reduce consumption in the fashion industry slightly, but no clothing is built to last forever.
However, most people don't wait until their clothing is falling apart to replace it. With the internet and modern technology, styles are moving in and out of fashion faster than ever. Fast fashion and major clothing brands are happy to play into this pattern as well, designing new products at faster paces. In 2004, Oakley developed Thump, sunglasses with a built-in digital audio player. One year later, the company created Razrwire, sunglasses with a built-in wireless cell phone headset. This rapid cycle results in people getting rid of perfectly good clothing. However, nowadays, people are donating more, keeping these items out of landfills and contributing to the rise of an industry.

Rather than disposing of their old clothing, people have more and more frequently been donating their gently used items. Many people donate clothing that has yet to even be worn. With 54% of U.S. adults currently trying to reduce their weight, millions buy clothing for their goal weight that ends up never fitting. These items, instead of going to take up space in a landfill and contribute to climate change, end up being bought by the increasing number of people shopping at secondhand stores. These stores have grown in popularity to rival even online shopping and the fast fashion industry themselves. By 2028, experts suggest that the used-fashion market is set to skyrocket in value to $64 billion in the U.S.

The Death Of Fast Fashion?

While fast fashion remains a massive industry, the resale industry is predicted to quickly surpass it. Currently, this more environmentally- and economically-friendly method of shopping is growing at 21 times the rate of the fast fashion industry. In order to keep up with consumer trends, fast fashion will need to evolve; otherwise, major fashion brands risk losing out to smaller secondhand stores nationwide.
at 8:00 AM

Email ThisBlogThis!Share to TwitterShare to FacebookShare to Pinterest
Labels: thrifting