How To Teach Your Kids About Plastic Waste 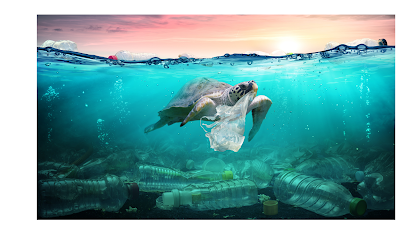 Countless Marine Creatures Are Tangled Up in Plastic Every Day, So How Can You Help? By Getting The Whole Family Involved In The Effort.

The world has a major pollution problem, and much of it has to do with plastic waste. Between 2004 and 2014, global production of plastics grew from 225 million tons to 311 million tons. In fact, nearly half of all plastic ever manufactured was made since the year 2000. That isn't inherently bad news on its own, but when you consider that less than one-fifth of all plastic is recycled worldwide and 18 billion pounds of plastic waste flows into our planet's oceans each year, then the predicament starts to become clear. And as recent data shows, our marine life is paying the price.

You may have seen one of the heartwrenching, and graphic, videos of a helpless sea turtle with a plastic straw stuck deep inside its nose. Or, even worse, your kids may have seen one of these videos and become distraught. But while it's clear that something needs to be done, it's not always easy to figure out what that "something" should be.


While we rely on plastic materials on a near-constant basis -- from the complex parts made by reaction injection molding to the household items we use and wear without a thought -- it's the single-use plastics that really cause harm. Many states and cities have already banned the use of single-use plastic bags, which seems like a step in the right direction, as well as plastic straws. Critics say that those efforts haven't yet made a big enough impact to help many marine species. Yet giving in to fatalism doesn't benefit marine species either.

Roughly 36% of children and 15% of adults go swimming at least six times per year, but many animals spend their entire lives in the water -- and we're mucking it up. Research shows that hundreds of sharks and rays are being entangled in plastic waste. In fact, scientists have compiled more than 1,000 documented events involving the harmful effects of plastic debris on these creatures -- and researchers say that the actual numbers are likely much higher. Since sharks and rays have a higher risk of extinction than most other animals, the data is certainly alarming. And while many people fear these two species, the reality is that their presence is vital to a healthy ocean eco-system. They're already in danger due to commercial fishing, but plastic pollution and even discarded fishing gear are making a bad situation even worse.

So what can your family do to help these vulnerable species? While there's no one perfect solution, reducing your family's reliance on plastic can be a great start. As you embrace these solutions, explain to your kids why you are switching from plastic straws to paper straws. Likewise, explain why you are purchasing reusable bags for groceries (ideally, ones made of recycled materials!), choosing recyclable cardboard packaging rather than plastic, and opting for reusable containers instead of single-use items.

When you were a youngster, you were probably recruited into efforts to help save the whales. Yet by reducing our use of plastic, we can help save whales, sharks, ocean birds, countless fish species, turtles, and hundreds of other marine animals.

What else can your family do to reduce plastic use at home? Disposable wipes and razors will end up in landfills while microplastics (found frequently in face wash and toothpaste) will get washed down the drain and into local waterways, so consider going all-natural, long-term, and DIY when possible.

Although our world relies heavily on convenience, it really won't take that much more effort to think globally when consuming plastic goods. And whatever effort you do have to make will likely be well worth it to preserve the planet's oceans and most vulnerable species. By getting the entire family involved in this project, you can help raise the greenest, most eco-friendly generation in history. Ultimately, that will have a huge impact on the health of the environment.
at 6:52 AM