Perspective And The Front Lawn By: Odysseus

The idea of being a guest blogger ignited my thinking around the idea of perspective and how important diverse and expansive perspective are to both growing children and growing parents.
Having lived my entire childhood, my youth, and most of my adult life in America, I feel a strong connection to all things American.  For better or worse. everything from baseball and beer commercials, two-party politics and ex-Monsanto executives serving as Supreme Court Justices to Native American "reservations' and ancient Redwoods, Nat King Cole and Nirvana, my psyche is saturated in Americanisms.
More recently, the smoothie of my consciousness has been enriched by some new perspectives.   My son Phoenix and I have lived the last five years on an agricultural Greek Island.   Here my ancestors, famous for their strides in the Maths, Sciences, Philosophy and the Arts, and on this particular island healing and medical insights, our perspective has expanded. The shift of perspective that a connection to my roots and a view of the USA from the outside has offered has been enlightening and instructional on many levels.
As a suburban teenager growing up in a typical white-picket fence, two-car garage community, mowing and watering the lawn in the spring and summer and raking and bagging the leaves to be discarded with the trash in the fall, were not only part of my weekly chores, but became a way of earning money, as I went to work for a friend's lawn care business.  In those days the thought that row after row of manicured grass lawns just might represent an enormous waste of resources, was not yet even in the germination stage of my conscious thinking.
Here on the Island of Kos, in the Aegean Sea, the only grass fields are the ones cultivated for playing football(or soccer as it is known to Americans).  The typical home here is surrounded by olive, orange, lemon and pomegranate trees and likely has grape vines somewhere on the porch or terrace.  Once spring comes, whatever front or back yards locals have, no matter how small or big, are turned into farming space.  With the first day of Spring a week away, I have been spending the last week starting seven different kinds of tomatoes, cucumbers, red peppers, some rare green beans passed on from the Cherokee (pre-America) nation,  lots of watermelons and cantaloupes. Greens and herbs I will sow directly into the Earth in the next couple of weeks. 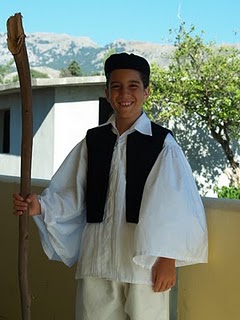 This photo, is not me as a suburban American teenager, but my son Phoenix before a traditional Greek dance performance.....


My personal journey from a lawn mower pushing teen to a farming father, has been a journey of perspective that has been informed by location, culture and an expanding awareness of the delicate balance between humans and the living Earth.  The "typical" American teen (if such a being exists), including those living in the concrete jungles of American cities, is much more environmentally aware than I was some thirty years ago, but the idea that every American grass lawn could actually be a productive food-producing farm is as far from a reality as it was then.
Of course it doesn't take leaving America to come to an agricultural perspective of the Earth.
My own perspective widened drastically when I moved from the sprawling brown clouded-air of Los Angeles to the fertile rain forests of Hawaii's Big Island.  There are certainly many environmentally conscious Americans pioneering perma-culture techniques and sustainable relationships with the Earth, but by and large they are the exception. not the rule in a culture that has morphed out of an American dream built on a post-industrial vision of transcending the toil of the land for the automated comforts of the technological age.
This lack of cultural perspective is a significant obstacle for the caring, environmentally conscious youth who somehow has been able to avoid being absorbed into the obsessive computer, mobile phone mentality of their peers.  Their culture is an obstacle because they have no real models of action and for the most part have to be self-motivated on their quest to re-connect with the earth and establish a harmonic relationship.
Here, for example, the rites of spring planting and sharing of local water sources have been taking place for more than two thousand years.  And significantly, two thousand years ago, this was not some pre-historic shadow of current practices, but a thriving organized, democratic community with theaters, medical schools and at some point aqueducts to transport the water.   In fact, this island was much more self-sustaining the, with a more diversified economy and without a reliance on the resource exploiting tourist industry.  But that is another story, the point here is that, the cultivation of the Earth, the use of resources and the production of food are all an intricate part of the cultural perspective that serves as a foundation for the youth in this community.
It is not born into the psyche of a generation who are rebelling against their elder's wastefulness in an effort to somehow reverse the massive damage unleashed by a culture that has come to view  magical, fertile Mother Earth as an ornamental art piece which we can manipulate to accent the view from our computer desks.
In the same way that art for arts sake, is no longer a responsible expression of a conscious artist, a lawn for aesthetic purposes is no longer a responsible use of resources or energies.  This example is, of course,  just one of a multitude that we, my son Phoenix and I, have learned as our perspective has broadened by moving from city to islands, from state to state and from country to country.  Awareness and perspective are inseparably linked together in all things.
My advice:  Avoid stagnation in all things, stay vigil in your quest to expose your children to diverse and varying perspectives and thus expand their awareness.  Whether this entails moving, traveling or exploring, have the courage to open doors and seize opportunities wherever they may be and to conquer the illusion that financial constraints may limit you.  And turn that lawn into a farm!
I will continue to riff on this theme of expansive perspective and share whatever insight I may have gathered along our path of expanding perspective on my Conscious Parenting/Nurturing Rainbow Warrior blog.  I also very much look forward to doing a live chat on Carol and Stacy's blog on Thursday April 21st. 9PM Eastern and hearing your perspective!


"Papa's Tribal Cafe' is about a quest to inspire, empower and encourage all that share this vital, enlightened mission of guiding, teaching and loving our children, so that they may realize their greatest potential. So that they may manifest joyful, meaningful lives and so that they will be equipped to not only survive on this dynamic new frontier, but will be able to blossom and shine." Odysseus