Study: No Evidence Linking Cell Phone Use While Pregnant To Impaired Child Development 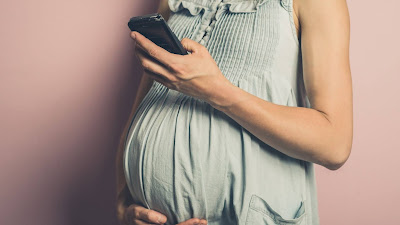 As a society, we depend on our technology for nearly every daily task. Some of us might even consider our phones to be an extension of our bodies. There are certain health risks associated with these gadgets, to be sure. For example, your cell phone is likely dirtier than a toilet seat, with 25,000 germs per square inch of surface area. But there is some relatively good news that may ease the minds of concerned parents around the world: a recent study has found no definitive evidence to suggest that using a cell phone while pregnant harms the child's brain development.

According to the study, which was published in BMC Public Health, evidence found that cell phones used by expectant mothers are unlikely to have a negative effect on their child's neurodevelopment. Further, any exposure to radio frequency magnetic fields as a result of cell phone use during pregnancy is not associated with poor neural development in children.


The study involved 45,389 mother-child pairs who answered questions regarding their own cell phone usage, as well as neurodevelopment follow-up assessments of their children at ages three and five. Researchers found that children born to mothers who used cell phones during their pregnancy actually had a 27% lower risk of developing lower sentence complexity, as well as a 14% lower risk of incomplete grammar. These children also had a 31% lower risk of having moderate language delay at age three, compared to babies whose mothers said they did not use cell phones while pregnant.

One possible explanation for these findings? Moms who communicate verbally via phone might also be more likely to encourage verbal skills in their children.

"Those women who talk a lot using their cell phones might also talk a lot to their child, explaining the association between heavy phone use and lack of reduced sentence complexity in the children. Hence enhanced maternal-child communication among cell phone users could explain our findings," researchers say.

Still, these findings don't give parents a license to use their technological devices without limits. Although we live in a digital world, there are things you can do to restrict your use (and that of your child) for the sake of stress elimination and forging social connections in person. Enforcing phone "time outs" for the whole family can be beneficial, especially when winding down for the evening. This can allow everyone to get a better night's sleep, too. You might also try organizing fun physical activities or even drawing up a tech contract for each family member to sign regarding screen time.

However, if you've been worried that those long-distance calls to your family while you were pregnant could have had a negative impact on your baby, rest assured: not only are they unlikely to have been harmed in any way, but they might even have better communication skills because of it.

Kelsey R. is a writer and an avid world traveler. When she's not writing or listening to 80s music, you can find her exploring different countries, taking selfies with her dog Lady, and in constant search for the perfect brownie recipe.
at 4:30 PM