Identity - Growing Up With Labels 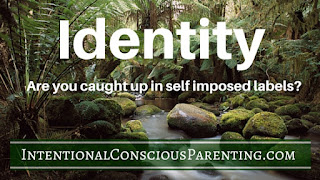 Identity - Definition on Dictionary.com
The Sense of Self, Providing Sameness and Continuity In Personality

We've all seen the studies and heard the horrible stories, the ones where someone's life long career suddenly ends and within a few days they've dropped dead or committed suicide.

I don't bring this up to have a somber conversation. I tell you this to have a discussion and shed some light on a topic I don't feel receives enough attention.

The way we humans are wrapped up in our identities. The multiple roles we play as humans in a life time.

These roles are important and help shape our outer form, but when we tie everything we are into these roles and they suddenly change, the walls can come crashing down. Sometimes the change is planned and sometimes it's unexpected.

Let me give you an example. Jerry lives next door, he's been a logger for 25 years. Due to change in supply and demand for wood Jerry no longer can rely on his profession to pay the bills. He feels like it is the end of the world. He's a master at what he does. He's put his blood, sweat and tears into his profession. Over time it has became his identity. Everyone around his little town knows him and how he's won the local lumberjack contest several years in a row.

The thought of being anything or anyone else is devastating. To be able to survive, Jerry will have to embrace change and reinvent himself.

Children grow up with labels that begin to shape their identities. Over time as they get older the roles become labels that can put them in a box and limit their expansion.

"You are such a great ballerina, soccer player, doctor, author, etc."

There's nothing wrong with praising your children or encouraging different roles and traits in their life or even showing them how to connect to their identity. The key is to show them they are way more than those roles.

They are spiritual beings having a human experience. An experience that let's them create and choose from multiple opportunities and choices that will come their way.

All these roles are important but none of them are as important as who they are on the inside.

Let's go back to Jerry. As Jerry dug deeper and did some soul searching he realized he wasn't just a great logger, he is a caring father, loving brother, a favorite uncle. He is cherished in his community and groups of friends.

As he dug even deeper and began to strip away all the labels that had been given to him through-out his life by the people in his life and himself he realized the most important part of himself was who he is on the inside.

Build on your child's inner foundations and inner truths and when the walls of identity come crushing down your child will be able to pick themselves up, dust themselves off and reinvent themselves much easier.

Being able to connect with the more genuine and deeper essence of their identity that's underneath their form reality is what will get them through and give them a solid foundation.

Their outer identities always remain and change, but the sense of who they are comes from that inner connection and knowingness only found within.

For more on this watch the following video by Eckhart Tolle: Balancing Form and Essence Identity.


Carol Lawrence is the owner of Social Media Help 4 U, a virtual based business that supports authors and businesses based on integrity. She is also co-authors the blog Intentional Conscious Parenting and is an assistant editor for the family and parenting community at All Things Healing.
at 6:00 AM